Mg3Sb2 is a new material which attracts great attention in the field of thermoelectric energy conversion. Compared with the traditional commercialized material Bi2Te3, Mg3Sb2 is environment friendlier and cost-effective. In the past, countries of the world carried out abundant researches on polycrystalline Mg3Sb2, and it displayed great potential for industrial purposes for its excellent thermoelectric performance. However, as a new thermoelectric material, research on Mg3Sb2 should be done urgently from the single crystal angle, which has great scientific significance in revealing intrinsic performance of this kind of material and directing electrothermal conduction. Mg3Sb2 crystal is a very elusive material because of its high melting point, volatile Mg element, and reactiveness to quartz crucible. In face of these difficulties, Professor Jin Min adopted flux-assisted vertical Bridgman technique in combination with pyrolysis boron nitride crucible method. After a three-year endeavor, Jin succeeded in making the biggest Mg3Sb2 single crystal in the world, thus making ready the key basic material for a study on its performance. By cooperating with Tongji University, Professor Jin found that Mg3Sb2 single crystals show n-type conductivity after being annealed under an Mg vapor pressure, revealing its nearly isotropic transport properties in this anisotropically structured material. This study not only deepens understanding of thermal conductivity and electronic performance of Mg3Sb2, but also serves as valuable reference in producing high performances polycrystalline materials  by cheap and scalable processing approaches such as powder-metallurgy. 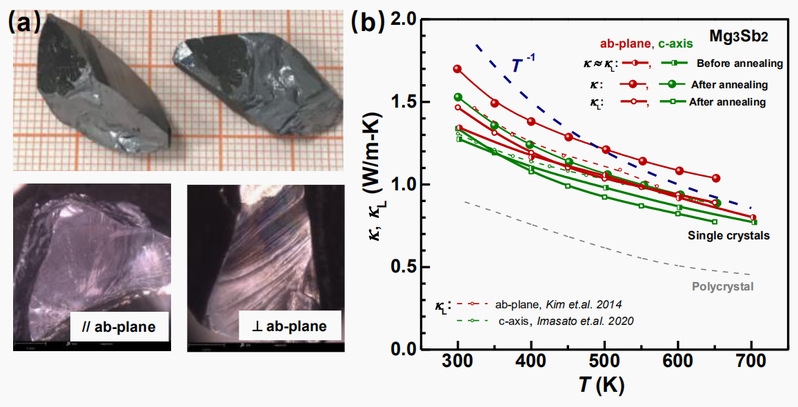